Question: Prove with experiment that the Probability of a fair coin is 0.5 or 50%.

Step 1: Take a fair coin and toss it 200 times and record each observation and the outcomes thereof. The following observations were recorded by tossing a fair coin 200 times:

For the time being, for our convenience, we have classified the observations of the experiment with a difference of 25.

Head of the Fair Coin = N

Tail of the Fair Coin = M

Step 2: Now we perform calculations of Probability in further details by the table given below:

Colum 1 of Table shows the Number of Experiments’ Lower and Upper Limits (The data of 200 observations is classified with a difference of 5 for detailed analysis). Second column shows outcomes of appearing Head (N) or Tail (M), and Cumulative Outcomes. TOTAL Colum shows the number of experiments during a particular time. Next column shows the probabilities of appearing N or M of the coin and their Cumulative Probabilities. These probabilities are calculated by the following formula:

Step 3: Then P (N) and P (M) showed the cumulative probabilities of N and M respectively. The point should be noted that, before experiment performed, the Probabilities of both N and M were Zero. Last column shows the number of Cumulative Observations/Outcomes of the experiment. Last Row TOTAL showed that the experiment was repeated for 200 times, among which 98 times, N appeared and M appeared for 102 times.

Now we plot these values on the line graph, and can show the probabilities of N, M and both N & M on the same plot area. 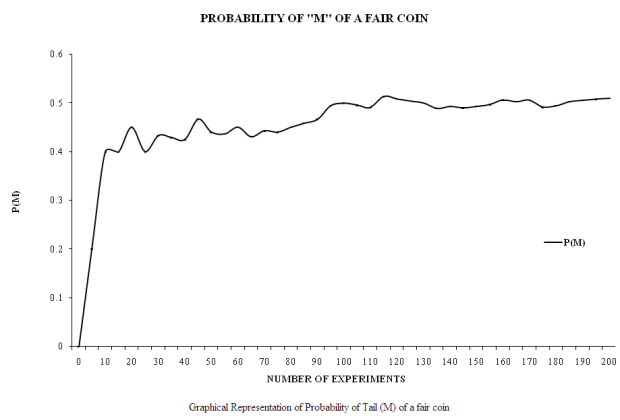 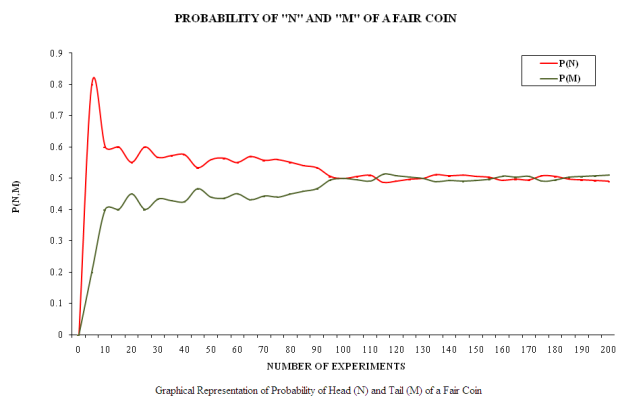 Note: If the same experiment is provided for more than 200 times, we can get more accurate results.

This entry was posted on October 18, 2012, 6:50 AM and is filed under ACADEMIC. You can follow any responses to this entry through RSS 2.0. You can leave a response, or trackback from your own site.